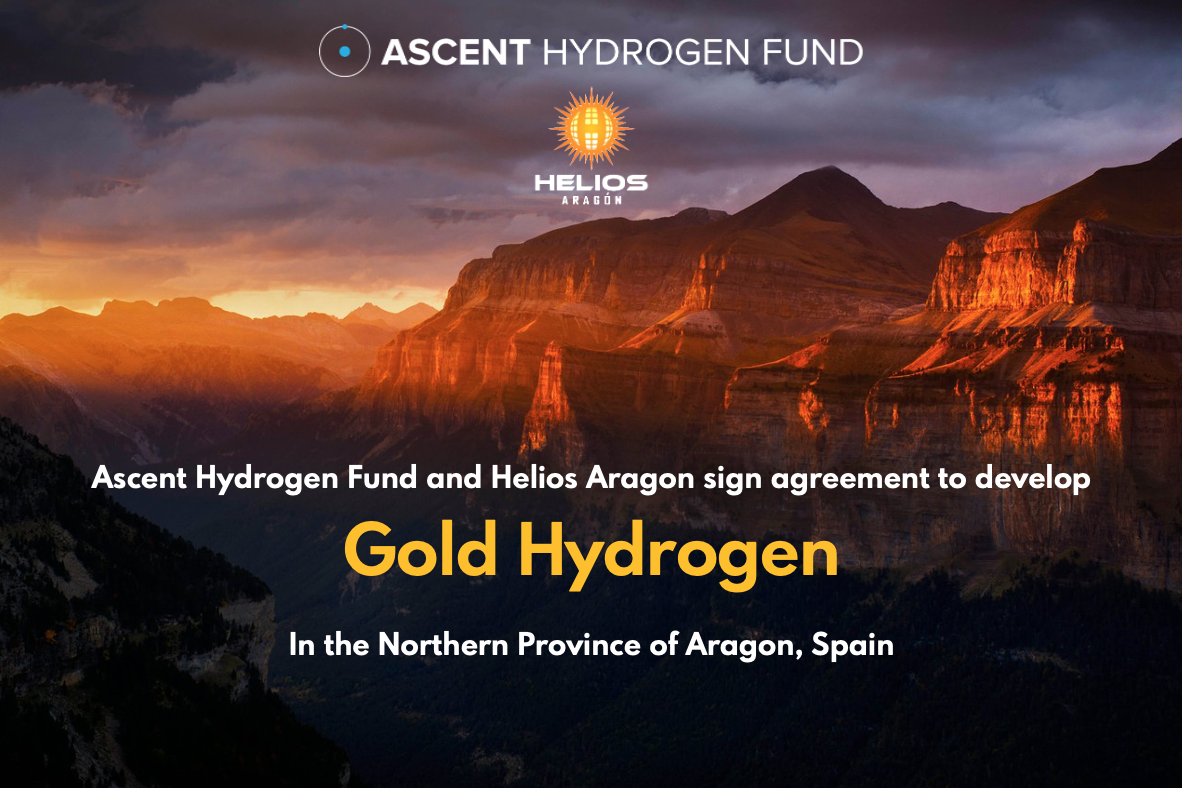 Established in 2018, Helios owns gas exploration permits covering 89,000 hectares in the northern Spanish province of Aragon where occurrences of natural hydrogen, which is non-fossil based, have been reported from wells drilled for oil and gas exploration for over 50 years.

Located less than 100km away from Zaragoza and originally drilled by Empresa Nacional de Petroleos de Aragon S.A. in 1963, one of the wells encountered anomalously high hydrogen gas shows at a depth of 3680 meters below surface. Further sub-surface data acquired and interpreted by Helios suggests the well may have encountered a structure that contains commercially extractable natural hydrogen.

Natural hydrogen generated by internal Earth processes has been discussed in the geological literature for over 100 years but it was not until Helios established a joint research initiative with Professor’s. Jon Gluyas (Durham University, UK) and Chris Ballentine (University of Oxford, UK) that the significance of the Spanish wells was realised.

Professor Jon Gluyas, an advisor to Helios and Executive Director of Durham Energy Institute at Durham University and Chair of the Geoenergy & Carbon Capture calls this type of natural hydrogen, “Gold Hydrogen” in order to differentiate it from ‘gray hydrogen’, which is produced from fossil fuels, ‘blue hydrogen’ which captures or buries the waste CO2 or ‘green hydrogen’, hydrogen generated from the electrolysis of water.

‘Naturally occurring molecular hydrogen is generated by a range of geological and biological processes which occur both shallow and deep within the Earth’s crust. Some of the hydrogen produced can be detected when it seeps to the Earth’s surface’, Professor Gluyas said.

“The natural production of hydrogen is a recent area of scientific research, and to date, little is known about hydrogen generation, migration, sequestration in the subsurface or how it accumulates in the subsurface. With the rising importance of hydrogen as a future non-carbon fuel, it’s very encouraging to see companies like Helios pioneer studies to see how natural hydrogen migrates, can become trapped in the Earth’s crust and ultimately, be extracted. If this is done in a safe, clean and low-cost way, this is the hydrogen that will be more sustainable and more acceptable in environmental terms than blue or green hydrogen. This is why we call it, Gold Hydrogen.”

Under the agreement, Ascent will initially support Helios through a three-phased work program starting in 2021 with surface geochemical analysis for hydrogen and helium gases, the acquisition of additional seismic data leading to the drilling of an exploration/appraisal well to a depth of approximately 4,000 meters.

Helios’ permits are less than 100km away from Zaragoza, a potential hydrogen hub

If substantial gold hydrogen and associated helium is discovered, this could unlock the potential to create a regional hydrogen hub, especially given the close proximity to Zaragoza a major city and regional capital of Aragon.

Dr. Christopher Atkinson, Chairman of Helios, said “At Helios, we challenge the misconception that hydrogen can’t exist in its pure form. To this end, we are excited to be working with Ascent Funds as well as regional players to propel Spain as the first true producer of Gold hydrogen on a global and commercial scale.

‘We see the potential for a Spanish hydrogen hub in Zaragoza which would play a crucial part for future distribution and demand and which would ultimately provide further job opportunities within the region. If successful, we will continue to further explore additional features in the Permits and grow the local hydrogen resource potential.”

Mr. David Wu, President of Ascent Hydrogen Fund said “Ascent’s global mandate is to look for champions across the hydrogen value chain from hydrogen production, hydrogen logistics to hydrogen applications. Following our investment into Hyzon Motors, a champion in the hydrogen mobility sector, we are excited to be now working with Helios, one of the very few companies around the world who have the real technical understanding and execution ability to develop gold hydrogen.’

Mr Wu also spoke to how Ascent’s business model works, ‘We work extremely closely with our portfolio companies, often daily and often as an extension of their own business. With Helios, Ascent will provide strategic oversight, business development and financial support which will give Helios the breathing space to really focus on the technology and science of producing Gold Hydrogen. If Gold hydrogen becomes a commercially scalable energy resource, this will disrupt the entire hydrogen ecosystem. This is the type of hydrogen champion that Ascent looks for.’

Earlier this year, Ascent Hydrogen Fund I invested into Hyzon Motors LLC, a leading hydrogen mobility company who has developed the world’s most powerful fuel cell and will be shipping hydrogen trucks in 2020. Ascent plans to launch Ascent Hydrogen Fund II, a US$100 million hybrid-structure fund in the first half of 2021 targeting hydrogen related companies with innovative technology matched with true scalability.

Established in 2018, Ascent Hydrogen Fund is a multi-strategy energy transition platform and manages the Ascent Hydrogen Fund. Ascent is co-founded by Mark Gordon, veteran energy investor with senior positions at Goldman Sachs, Soros Fund Management, Paulson & Co and Janus Henderson, and IPO expert David Wu, a former Rothschild banker and ex-Chairman of Capital Markets for Fosun International, one of the world’s largest investment companies with over US$100bn in total assets.

Helios Aragón Exploración S.L. (“HAE”) is a 100% owned subsidiary of Helios Aragón Pte Ltd which was incorporated in March 2018 with the intent of exploring and producing natural hydrogen (Gold Hydrogen) and natural helium within the autonomous region of Aragón, Province of Huesca, Spain where Helios currently owns exploration permits covering an area of 89,000 hectares.

Durham Energy Institute (DEI) is the hub of energy research at Durham University, a world top 100 university with an international reputation in research and education (QS World University Rankings 2021). We produce world class research for understanding energy decarbonisation and deliver integrated solutions for the transition to net zero incorporating social, policy and technical insights. DEI are leading national research networks for Hydrogen Fuelled Transportation and Decarbonising Heating and Cooling. They are also developing hydrogen fuelled transport powertrains, Combined Heat and Power and integrated energy hubs, as well as research on the utilisation of captured CO2 with Hydrogen. For more information about Durham Energy Institute visit: www.durham.ac.uk/dei/